A tough question in some ways, as it asks me to comment on the pastimes of some of my close neighbours and my relations. It was a question that I was prompted to ask recently when I saw a new sign posted at Querrin crossroads. 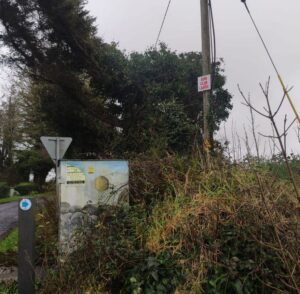 It’s easy for me to condemn shooting, but at the same time, I fish off the local pier and head out for mackerel in the summertime.

Perhaps, the violent noise of the shotgun is a factor. I feel for sure, that hunting for permissible species at a site that is shared by protected species at the time, can only be detrimental to the welfare of those lucky enough to avoid the pellets. It seems an unreasonable distress to visit upon already struggling water birds.

I remember hunting for rabbit, pheasant, woodcock, duck, and snipe with my father and uncle in the 1970’s. It’s just what we did. I had no issue with the practice. In fact, those experiences may well be the ones that informed and drove my interest in our local biodiversity and its wellbeing, or otherwise.

So, how do I rationalise that more than 30 years later that it maddens and saddens me when I hear of a neighbour relating their satisfaction at shooting three foxes recently?

I now find it difficult to appreciate their sense of achievement in shooting inedible wildlife, at a time when wild rural Ireland is drastically depleted.

I understand the cultural element, I come from there myself, but as a society we’ve consciously left some practices well behind and I think that shooting is one that should also be part of our history.

We now need to urgently do all that we can to strengthen and diversify our rural habitats to afford the skeletal remains of our biodiversity the slim chance of surviving for the next generation to engage with and enjoy.

From wildflowers to higher predators and wild fowl, none seem safe from our wants and vagaries.

There is magic out there if we take the time to explore and learn about it. Ironically, it is the hunters that may know most about what’s around us, but I fear their core beliefs seem to, in most cases, prevent them from forming non-exploitative relations with nature’s bounty. When one’s core beliefs are questioned, the natural response is to be immediately defensive. I feel this acutely myself, when eco-centric and ‘green’ ideas are ridiculed without debate. I find myself rejecting the message of the ‘other’, but really we all need to think about what we think we ‘know’. So my views may fall on deaf ears, but I think that it’s better said than not… Imagine erstwhile hunters leading the wildlife surveys and sharing their vast local knowledge and history? Now that would be interesting and of value!

So, that brings me to the Fantastic Mr. Fox and my upset at hearing of the untimely demise of some of my vulpine neighbours. Was ‘my fox’ dead?

During 2020, I think that a lot of us got to know more of our local surroundings. The first lockdown happened during Spring, when every day as we walked the same patch, life seemed to explode and flourish at an astonishing rate.

Part of the lockdown experience for me was following the toing and froing of a fox at Purecamping. I used to look forward to checking the times of his passing through our yard. I’d seen him/her battle through, despite inclement weather and despite showing obvious injury at times.

In September, once our visitors have gone, I put trail cameras in the woods, hoping to see the fox. At one stage, I tied a chicken carcass (which had ironically been killed by a fox) to a blackthorn and put a camera on it. It was a real insight into its behaviour. Having discovered the carcass, well off the beaten track in a dense briar thicket, the fox visited a number of times over a few days before committing to the meal. Before chowing down, the fox seemed to clear a safe access and egress. It trimmed and cleared brambles before grabbing it. It seemed surprised when it found the carcass was tied down. It left it and it was full 24 hours later before it decided that all was safe and it took the risk of consuming it in place. Here is a short video of the fox preparing the way in by cutting the briars. The white carcass can be barely seen in the middle of the frame… That was in early October…

By late October, the fox was still passing by the same spot. I expect in search of another freeby.

On our yard camera, throughout November and December, I watched as the fox began limping and then recovering over time… a story in itself… Here’s a series of short videos from that time. Nothing spectacular, just the nightly comings and goings…

So, I’ve yet to see the fox since January 3rd last, which fits nicely with timeline of the three foxes having been shot locally.

I’m not into a blame game at all. I promise. I just think that ‘it’s later than we think’ when it comes to the challenges that we face from climate change and biodiversity loss. I was recently struck by Sir David Attenborough’s New Year message. It was evocative, but exotic and remote. It featured tropical and foreign signature species, which are important, but I suggest that his message tends to give us a bit of a ‘pass’, whereby we can ignore the devastation in our own backyard. David Attenborough remains a hero!

Before I go, can I recommend to you a book by Padraic Fogarty from the Irish Wildlife Trust that is called Whittled Away.

When I reflect on the wealth of wildlife that I experienced while out shooting all those years ago and compare it to the arguably green desert that I witness today, I think that it’s time that I ask and answer the question about “how I feel about shooting in 2021”.

Since I wrote the above piece last week, I was contacted by the owner of the farm where the sign was erected. They’d had no knowledge of the sign being there. They contacted the person that leases the land with a view to taking it down and to replace it with a number of signs prohibiting shooting/hunting on their lands! So, the sign is down already and I understand that new ones are being sourced as I write!

Someone that the read the post had emailed the landowner with a link, so again, one action lead to another, which lead to the landowner acting too! So much thanks to them for their initiative! Beir bua linn!

Since the last update, where one “Gun Club Lands” sign was originally posted, the property in question is now ringed with new ones espousing a very different message… 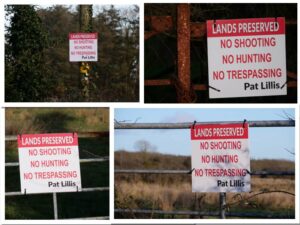 A Celebration of the Pine Marten

12 Days of Christmas - 2022 Day 9: A Celebration of the Pine Marten A pine marten minute to enjoy. We've had only a few clips of the pine marten in the last couple of years. It's always exciting to get a brief view into the mysterious world of the elusive pine marten....
Read More

A day in the life of the undergrowth

12 Days of Christmas - 2022 Day 8: A day in the life of the undergrowth This is from a couple of years ago, but I still remember reviewing the footage from the SD card. 🙂 Early in the day we see a little water rail. Later in the evening the secretive pine marten comes...
Read More

12 Days of Christmas - 2022 Day 7: Badger Wrestlers We do see badgers occasionally passing by our trail cameras. Typically they are on their way from A to B, without much to report. Occasionally, we get to see them dig for worms as they go, or even sprint off when...
Read More

12 Days of Christmas - 2022 Day 6: Great Tit It's mid-April 2022, just before we open up fully and I put a camera on a dead leveret that I'd found. I was hoping for an opportunist fox, or pine marten, to visit so I could see what might happen. What I didn't expect to...
Read More

12 Days of Christmas - 2022 Day 5: The Irish Stoat We've only twice captured a stoat on our trail cameras. The first time we saw one, it was in full chase of a rat. It was all over fairly quickly (Stoat 1 : Rat 0). This time the stoat was on its own looking over a...
Read More

12 Days of Christmas - 2022 Day 4: The Elusive Water Rail You can't imagine the excitement we felt when we saw that we'd caught a water rail on one of our trail cameras. This secretive amber-listed bird is heard more often than seen (said to sound like a squealing pig...
Read More

12 Days of Christmas - 2022 Day 3: A Busy Redwing Loads of redwing thrushes in the Purecamping woods in Winter 20022! 🙂 A common, but welcome winter visitor from the North. Birdwatch Ireland has them favouring open fields, but our woods seem to be just as attractive....
Read More

12 Days of Christmas - 2022 Day 2: A Wonderful Woodcock The fantastically camouflaged woodcock in the Purecamping woods. Talk about a beautiful bird! Check out the variety of colours in the plumage! Now with a Red conservation status in Ireland due a decline in the...
Read More

12 Days of Christmas - 2022 Day 1: A Solstice Fox As we enjoy our Christmas fare, spare a thought for all our wildlife. Daytime sightings of the Fantastic Mr. Fox are rare, but Winter hardship can force daylight foraging. Just think about their challenge of waking...
Read More

#1 Santa's robin, a favourite for many. This robin was in the bushes waiting for an opportunity to collect the crumbs left by the other birds on the feeder. #2 Goldfinch - Lasair choille (Wood or Forest Flame) Easy to see where it got its name. This confident little...
Read More
This website uses cookies to improve your experience. We'll assume you're ok with this, but you can opt-out if you wish. Cookie settingsACCEPT
Privacy & Cookies Policy